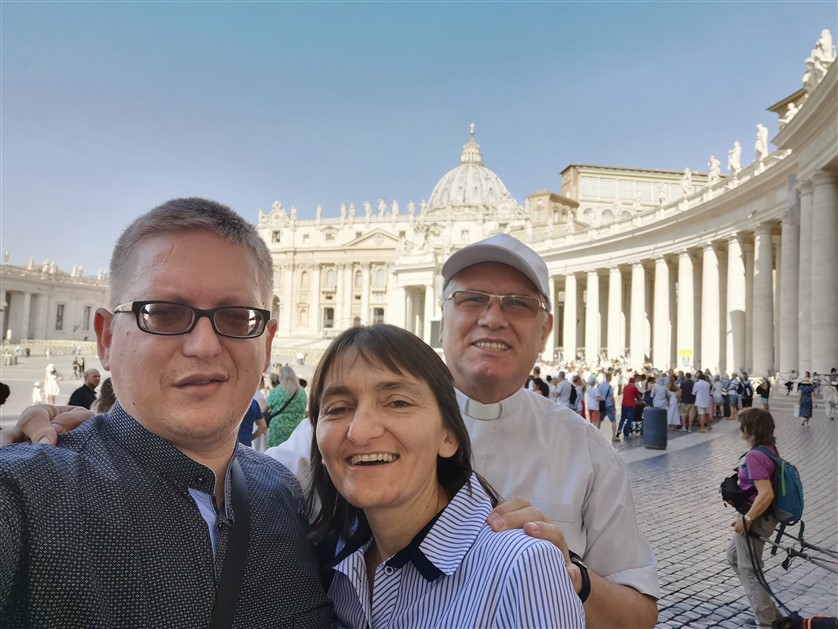 From June 28th to June 29th, the celebration of the 175th anniversary of the Apostoleship of Prayer and today the Pontiff of the World Prayer Network, including the Eucharistic Youth Movement, was held in Rome. In addition to those 175 years of history, the anniversary was marked by ten years since the process of restoring the Apostleship of Prayer (which is now a Pope’s work with legal administration in the Vatican state), which was approved by Pope Francis.

The anniversary was celebrated in the Vatican with an international meeting, attended by 52 delegations from the five continents, representing more than 5,000 people, including representatives from Croatia, Zvonko Vlah, National Director, his associates, NelicaValidžić and Darko Fiket.

The general direction and coordination of this two-day event was under the jurisdiction of Fr. Frédéric Fornos, SJ, – the International Director of the Pope’s Worldwide Prayer Network, appointed by the Holy Father in 2016 – and his international team.

The day came when we headed for our train trip to Rome. There was no end to our joy  when we sat in the train and started our communion. It was an opportunity to get even deeper acquainted with and discuss how to further improve the activity of our community. There were a lot of topics that were being explored in the communion with other travelers and to our enthusiasm family from Pakistan with their little children who were approaching us shyly at first, then encouraged and made the first step, so with their perfect English language the children’s rhymes were sung. Than thanks to female fellow-traveller, Beatrice, they got the colours and the kids painted with us. We played many other games with them, so the time of the ride passed really quickly.

Upon arrival in Rome we got familiar with their Metro (underground) which delighted us with its easiness and speed of arrival to the wanted destination through A, B and C lines which we adopted in a few days. After we reached the wanted destination, Home of Croatian pilgrims in Rome, and refreshment from journey, we prayed the rosary together, had  a holy mass, had dinner and went to bed.

At about 12, after a brief introduction by Fr. Frédéric Fornos, SJ, and with the presence of Fr. Arturo Sosa, SJ —Superior General of the Society of Jesus—, Pope Francis joined in the celebration of the 175 years of his Prayer Network and the 10 years of its re-founding. Representatives of 6 delegations gave their testimony to the Holy Father about the joy and profound experience they lived in praying for his intentions and discovering The Way of the Heart. Francis, after listening to each one of them and greeting them personally, addressed all those present expressing his gratitude its work and reaffirmed his Prayer Network in “the foundation of its mission: the compassion for the world.” In his speech, he reminded everyone that “the heart of the Church’s mission is prayer.”

The Apostoleship of Prayer / now PSMM /, with the help of digital technology, is approaching the old and the young, helping them give new life to the traditional apostoleship of prayer. It is necessary that the mission of the Church is adapted to the time and to use modern means that make the technique available to us. It is about entering into contemporary areas of proclamation of mercy and God’s goodness – said Pope Francis among others.

After that, there was an impressive moment for all those present in which the Holy Father inspired us all to contemplate – in silence – and to prayer with the heart. Then there was a prayer for the missionary mission of the Church. It was moving to look at the present, in a compassion, silence, with great care and joy, closely following every word spoken by Pope Francis. After the meeting, the communion continued at St. Peter and the surrounding streets of the Vatican where it was the song and the joy of the first part of the encounter. We used part of the free time to visit the dome and basilica of St. Peter, sharing photos and buying souvenirs for our loved ones.

The 175th anniversary of the Pope’s Worldwide Network of Prayer continued with a Eucharistic celebration in the Archbasilica of St. John Lateran —the cathedral of the Diocese of Rome. The Mass began at 7 p.m. and was presided over by Fr. Arturo Sosa, SJ, and concelebrated by the continental coordinators of the Prayer Network. Fr. Frédéric Fornos, SJ, was in charge of giving the homily, in which he remarked how the Way of the Heart is a school of mercy that transforms us to enter into a mission of compassion for the world. “This is how our mission is summed up,” observed the International Director. “To have the gaze and gestures of Jesus towards others, for the world, offering our life. And so, with our prayer (which is already a way of loving), we can lead men and women, and the challenges of our time, to the Heart of Christ, a mission of compassion for the world.”

Here I must emphasize my thanks to father Zvonko who enabled me to minister in the ceremony with active participation through the services entrusted to me. I felt extraordinary pride, but at the same time I could feel responsibility, and I could deeper experience my service to the Church and to the people with the indisputable feeling that overwhelmed me at those moments.

After the Holy Mass and summing up impressions, we went to the nearby cafe and found that the gifts for our loved ones remained in the basilica. But this was a lesson associated with God’s providentialness … which today is unknown to many people, and God really cares for all, and who trusts in Him realize that nothing can be lost!

The second day of celebrations brought together, in a historic meeting, the directors and national coordinators of the Pope’s Worldwide Prayer Network and its youth branch (EYM), who were summoned at 9.30 a.m. to the headquarters of the General Curia of the Society of Jesus in Rome. At 10 a.m. the day began with the opening remarks by Fr. Frédéric Fornos, SJ.

During this time, they shared different ongoing projects in order to consolidate the recreation process that the Prayer Network is living and to go in depth in its spiritual foundation: the Way of the Heart.

Towards the end of the meeting, Fr. Arturo Sosa, SJ, joined in, expressing his gratitude to all for this recreation process that the former Superior General, Fr. Adolfo Nicolás, SJ, had launched in 2009. He also reaffirmed the support that the Society of Jesus offers to this pontifical work, stressing its open nature in the mission of compassion for the world.

And at the end of the meeting we all shared experiences of work and action. At the very end of the meeting, one of the coordinators of the meeting said a sentence that gave us a smile on our faces, and it was that the bag of presents was found in the basilica of St. John Lateran and that its owners can come and get it … And there was God in his work … Thank Him ….

The Feast of the Eucharistic Youth Movement “United in Your Love”

On Saturday afternoon, June 29th, it was the turn of the youth branch of the Pope’s Worldwide Prayer Network to join this special commemoration and close it after two days of celebrations.

Namely, the EYM / code known to us as “KRIŽARI”/  was created as a branch of the Apostolate Prayer in 1915 and was confirmed on this day / June 29, 1962. The International Director recalled the experience of the disciples on the road to Emmaus: when hearing the word of God, they recognized Him, the resurrected one, at the breaking of the bread. And then they went out spreading the good news with the joy that a new life in Christ brings along. He also recalled how this Eucharistic way that the EYM proposes opens a way of living. At 20 o’clock, a festival began in which young people had the opportunity to express the culture and customs of the countries they came from.

On the same day we visited many other Basilicas and churches nearby and completed that day and after returning to the pilgrimage home we had a holy mass and went to bed.

We used Sunday morning to sleep little longer. We had the Holy Mass in the chapel presided by Father Zvonko who brought us closer the Sunday Word of God and after breakfast we went on a tour of other Vatican and Rome sights.

At the Potifical Gregorian University, we were welcomed with the kindness of Father Josip Jelenić, who had acquainted us a little with the work of this institution and we had the chance to dine together in their beautiful surroundings.

After lunch, the offered coffee and juice we continued to visit the sights from the fountains, the squares and many other places that really should be seen. We were in the Church of the Sacred Name of Jesus (Chiesa del Santissimo Nome di Gesù) in Rome known as “Chiesa del Gesù” or even simpler “Il Gesù”, which is the central Church of the Society of Jesus. It was built in the spirit of Tridentin’s Parliament. Thanks to Dr. Hrvoje Juko, who has been studying there, we visited the rooms of St. Ignatius that are on the last floor of the Jesuit residence built by St. Ignatius, the founder of the Society of Jesus, and with a conversation had a little refreshment.

After that, we continued our journey all the way back to our pilgrimage home.

Everything that is beautiful lasts shortly so we have concluded our stay in Rome. After the mass and breakfast we went to Metro where we had already masterd the initial difficulties and returned by train to Trieste, and after that we returned to Opatija by car.

By collecting our impressions of the way and the days we have been through, we thank first and foremost the beloved God for the grace he has given us and we hope that this experience has improved every single of us and that we have filled the batteries for some new challenges ahead.

Thanks Nelica and thanks pater Zvonko.